This past weekend, I installed a set of polished aluminum fenders on the Polyvalent and took it for a leisurely cruise down to the Milwaukee Art Museum. 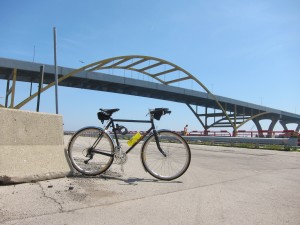 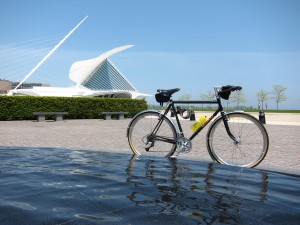 I’ve been commuting on a Surly Long Haul Trucker for about a year. It’s a well-built, well-designed touring bike, but since I don’t do much (any) touring, it’s not ideal for my 5-mile commute. The oversized steel tubes and undersized, 26″ wheels make for a somewhat harsh ride over the rough Milwaukee streets.

Before the LHT, I commuted on a Surly Cross Check cyclocross bike. Compared to the LHT, the Cross Check was smoother and livelier, but not as stable with a rack and panniers. Plus, it had long horizontal dropouts, which made it difficult to remove the rear wheel with fenders installed.

Tomorrow, my new commuter bike will arrive – a Velo Orange Polyvalent. The Polyvalent is a traditional city bike (a porteur, si vous plait). It has 650B wheels, skinnier frame tubing, and geometry that’s optimized for carrying its load up front. I’ll assemble it with parts from the LHT, plus some new stuff. The part I’m most excited about is a dynamo front hub, which will power a headlight that never needs recharging.